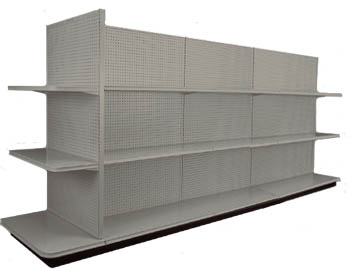 When configuring a Gondola End Cap is typically configured as the same size as the Gondolas. Less of a depth on the base shelves can be used, although generally the end cap is the same height as the Gondola. 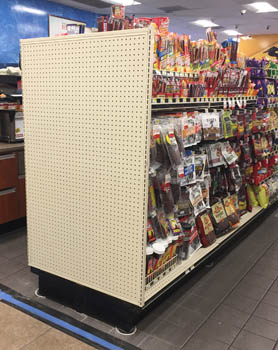 As depicted above, what is known as an End Grame can be mounted to the upright at the and of an aisle of Gondola Shelving with a mount or bracket the connects the Gondola End Frame to the Gondola Upright.

The description of a Gondola End Frame would be a framed unit with a backboard installed.  A standard backboard would be sither a pegboard back or a sollid back. Custome backs can also be utilized by special order. Custome backs would include but not limited to a lit back, slatwal back and a wire grid back.

Upper shelves can also be added to the end frame although the end frame cannot support as much weight because there is no base shoe to support all of the weight Gondolas are known to suport.